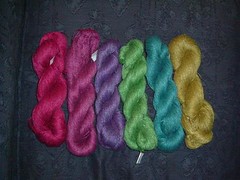 This is a very fine yarn. I needed to go down to 2mm needles to get a nice fabric when knitting singly.

It's quite stiff to knit with. If you find that knitting cotton hurts your hands then you'll hate this. Another effect of the stiffness is that if you drop a stitch it just sits there. I dropped one and didn't notice until over a hundred rows later, and it was still just sitting there. It had propagated down only two rows even though the work had been shoved in and out of my bag loads of times.

After washing, the stiffness disappears to leave a soft, non-scratchy, gorgeously-drapy fabric.

The colours vary significantly between skeins. When I was picking out my colours at the Knitting and Stitching Show I saw quite how much they vary - to the extent that I was choosing my colours within a shade as well as choosing the shade.