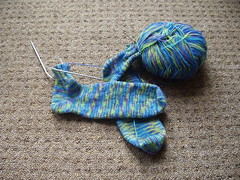 I have made socks before, but never in a pair.

I avoided second sock syndrome by knitting both socks at the same time, using both ends of the ball of wool. I swapped between them as I felt like it.

I used 2.75mm circular needles (and the magic loop technique), with an initial cast-on of 52 stitches. I left 12 stitches unwrapped in the middle at both toe and heel. I started the ribbing 4cm after joining post-heel, and increased to 60 stitches in the round before starting the ribbing. I used K3P3 ribbing and did 48 rows of it. I cast off using the Icelandic Bind Off (knit version).