London.crafts wiki - Differences between Version 8 and Version 7 of Kake's Eskimo Scarf For Liz 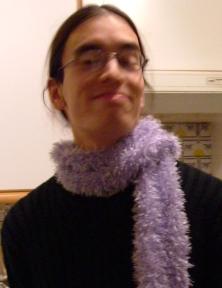 The first attempt (see below) just wasn't working. The black merino yarn is lovely, the double knitting technique is interesting, yet they were combining to produce something very very boring. Plus the Eskimo bits on the end were turning out to look like they were just bits of fuzzy fabric sewn together - an effect I could get with much less effort by, well, taking bits of fuzzy fabric and sewing them together.

So I decided to do something completely different.

What I'm doing now is knitting a single strand of the Eskimo in garter stitch on large (7mm) needles at 25 stitches per row. I'm much happier with it. It's silky and furry and flimsy and pretty, and I think Liz will really like it.

(This is not as utterly simple and uninteresting as it sounds; I don't think a complete beginner at knitting would be able to even keep the yarn on the needles.)

Oh yes, and I'm making a neat selvedge by slipping the first stitch of each row as if to purl, with yarn in front. This makes a kind of chain-like selvedge.

Lilac eskimo yarn (in rib) on the ends, black merino in the middle (in double knitting). Of the photos to the right, the top one shows the truest colour of the eskimo yarn. The bottom one is included to show what the yarn looks like wound into a ball.

I wanted the scarf to look the same on both sides, so I needed reversible stitch patterns. Double knitting was the obvious choice for the merino. I tried the eskimo in double knitting as well, but it got too thick and stiff, and half of the threads were inside so couldn't be seen. Rib works fine. You can't see the actual stitch pattern with this stuff, just the variation in fluffiness. I'm using the eskimo doubled.

I'm not doing the entire scarf in eskimo because although it looks nice I think it would be uncomfortable on the back of the neck.

Below is a photo of how the scarf looked when I decided to rip the whole thing out and start again completely differently. You can see that the fabrics don't really sit together very nicely.

And here are closeups of the black merino and lilac Eskimo sections. I think the double-knitted merino fabric is really lovely, but it's just not exciting enough for a fancy scarf.